There’s something diabolically satisfying about silencing an annoying fly with a fly swatter. The Zap It! takes that idea, makes it possible outdoors, then brings it to the next level. Plus, it adds high-tech features such as USB charging, bright LED light and safety mesh to boot!

While practical in function the Zap It! can practically be considered a toy for adults. Who could possibly resist an electrified tennis racket with a cool lightning bolt symbol at the center of the mesh? The sheer novelty of it will inspire curiosity in your friends who will want to give it a swing for themselves.

The unit is powered by a battery which provides 2,000-volts to the grid. This will instantly kill flies, mosquitoes and other flying insects. It can be charged via a micro USB port located at the bottom of the handle (under a small yellow cover). This is a welcome feature in an era where phone chargers and so ubiquitous and USB ports are found in practically any laptop. 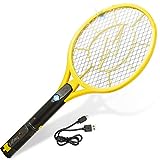 Now you may be wondering how difficult it is to start zapping bugs in a large backyard. This is where the LED light comes in. The super bright LED attracts the bugs to just about the right general area and all you need to do is apply some skill to that backhand.

It should be noted the Zap It! handheld zapper is also useful indoors.

In case your drunk uncle tries to electrify your backyard barbecue guests the racket has a triple layer safety mesh that will protect them from harm. It’s only bugs that need to be afraid of this thing.

This is a rigid swatter so the price of the technology is that you won’t want to risk cracking it by slamming it against walls and other hard surfaces. Still, this adds to the fun as it requires a different swatting technique compared to floppy classic fly swatters.

If hunting down pesky flies and mosquitoes sounds like fun stop reading and order this thing today. With a street price of around $20, you can’t go wrong. However, keep in mind you’ll want to have either citronella torches or a traditional bug zapper too if you plan to stay outside for hours. As fun as it is you won’t want to be the official bug killer guy or gal for too long, and neither will your guests after the “hey, what’s that?” factor wears off.