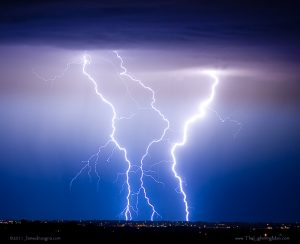 “Powerful” is a word used loosely by many electric insect killer manufacturers, so I recognized the need to compile a list of truly robust models that fry mosquitoes to high heaven. To make the grade all zappers needed have a big, bad electric grid at its core, coverage of at least one-acre outdoors, and preferably utilize multiple 40-watts UV lamps.

Order reflects the level of brawn: best stuff at the top. So let’s take a look at the fairly small pool of high-wattage heavy-weights available today.

Covering a whopping 2 acres outdoors or 2,000 sq. ft. indoors, the FC-8800 Diplomat is Flowtron’s flagship. And that’s saying something as Flowtron makes more high-coverage, powerful models than anyone else. It’s also a beast in terms of size, measuring 12 x 12 x 27 inches; that’s over 10 inches taller than their other powerhouse, the BK-80D. 120 watts of UV muscle is provided by three 40-watts bulbs.

Although the Diplomat will kill any flying pests including mosquitoes, its specially designed to lure flies with its reflector panels and replenishable pheromone lure.

If it’s mainly mosquitoes you want to crack down on, the BK-80D provides top-end specs at a really fair price. It covers 1 ½ acres compared to the 2 acres of the FC-8800 above yet sells for one-quarter as much. The top of the case resembles a pitched roof which is a nice touch as this is a classic hanging design that must be mounted on a security pole in an uncovered area.

This space-aged offering from Stinger has the same coverage specs as the BK-80D at 1 ½ acre. However, it’s a little weaker in the UV lamp category with one 50-watt bulb rather than two 40-watters. To make up for that the killer feature here is the smart sundown sensor which turns the unit off at dawn and on at dusk.

The “3-in-1 kill system” marketing jabber is a little overblown as a UV light, octenol lure capability, and clog-free grid are pretty much standard features.

While not as amazing as the zappers that came before it on this list, the BZ-40 looks decent on paper. It features 5,500 volts of power compared to 5,500 watts in the Stinger 3-in-1. UV lamp power is the weakest of any we’ve look at, with just one 40-watt bulb.

BZ-40 has a regular and deluxe edition with one key difference: the deluxe model has a sensor that turns the unit on at nightfall and off when the sun comes up; the same feature that is built into the Stinger 3-in-1 standard.

It’s last here due to bug control performance that lags behind Flowtron and Stinger products. Complaints about reliability are also stacking up, so while Black Flag’s offering will work in a pinch it shouldn’t be your first choice.