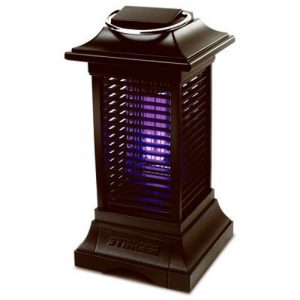 Maybe your bug zapper needs aren’t that demanding, or perhaps running a power cable to the right spot on your deck to an insect control device isn’t feasible.

Everybody wants to cut the cord for the sake of convenience, but only certain people should. For people that enjoy hosting backyard gatherings often, a bug zapper that protects the entire yard is a must. Many of us don’t need that and can improvise with Citronella torches when special occasions arise. If it’s that one spot you spend the most time at that matters, your deck or stone patio, for this purpose the Stinger by Kaz is ideal.

The Stinger covers 625 sq. ft., which is approximately 25×25 ft. It’s a modest specification, but if it’s all you need and the idea of battery power appeals to you, it might be worth the tradeoff. On full charge it runs 3.5 hours. This also limits its applications. It will protect you and company while sitting outside for an after-work brew, but you’ll want another product for an outdoor blast.

The unit charges and operates while plugged-in. In a pinch you won’t be out of luck if you run out of battery power as long as electrical outlet is nearby. Recharging time is three hours. The status light is red while charging and it switches to red when it’s ready.

There’s a switch with two settings: UV killing grid and lantern mode. When lantern mode is engaged two white LEDs light up. It’s more of a decorative light rather than the bright illumination you’d expect from a lantern. This is a unique feature that adds to its utility, and makes it even more attractive to campers.

To attract pests it uses NOsquito Mosquito Octenol Lure. It contains octenol to pull in and kill mosquitos and other annoying insects. Attractant is slowly released over the course of 30 days. So you’ll be replacing these each month at $7.50 a pop, which is a pretty standard cost for operation comparable with Flowtron and others.

Cleanup is a little trickier than you’d expect. If a bug hits the metal interior it will stick to that rather than drop down to the removable tray. It’s not a deal breaker, but it may be a good idea to dismantle it every blue moon to clean the unit thoroughly.

The Stinger is perfect for small gatherings and particularly campers who will appreciate its rechargeable capabilities and lantern mode. The unit only covers 625 sq. ft., which is just enough to protect an average deck or patio. Its strengths may be most apparent to those who have a larger unit and can use both units together or just one depending on what is needed that evening. 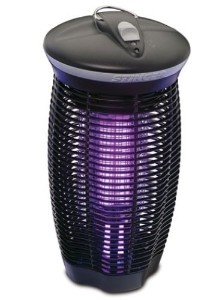 A bug zapper is a fairly simple electronic device. It isn’t a rocket ship folks. For that reason it’s surprising that so few companies can churn out a decent zapper. To get it out there from the start, a good portion of Stinger bug zappers are destined for the scrap heap. Although the UVB45 isn’t among the worst mosquito killers out there (that stuff is shockingly shoddy), picking one up a risky endeavour.

The UVB45 has a sleek, futuristic look. This stems from the fact that most zappers currently on the market were designed in 80s. The grill is curved while we are used to seeing straight grills and boxy designs. Unfortunately the build is plasticky and not particularly tough.

A 40-watt black light is employed to attract pests. Stinger claims it attracts 40% more insects than a conventional light. It releases a smell similar to that of a mammal via the Octenol lure. People are often wowed by the lights on bug zappers, not realizing the importance of scent. The UVB45 does a good job of attracting mosquitos.

Since this is a recent design it has some pretty advanced electronics inside. A built-in sensor detects the amount of light outside allowing the unit to turn off during the day (when mosquitos aren’t a threat), and turn on at night.

The Stinger UVB45 covers 1 acre of land admirably as advertised. On an especially humid night it pulled in 20-30 mosquitos, plus a few moths when I tested it. They also offer the UV801S which covers 1 ½ acre and the FP15 which covers ½ an acre.

One advantage this unit has to more classic designs is quieter zapping. Then again that can be a disadvantage if you draw amusement from hearing your mosquito death box at work.

It kills well when it’s working, but don’t expect it to do that for long. The Achilles heel of this unit is its reliability. Commonly it will go dead after only a few months of use. People usually wrongly assume that the light burned out, so they buy another only to find it still doesn’t work. Often the starter is the culprit and since you can’t change it out yourself without and engineering degree, you’ll need to send it back to Stinger. The company is pretty good about the initial replacement but if your second unit dies, you’ll probably be out of luck.

Manufacturing errors and poor electronics aside, the exterior isn’t tough enough to cut the mustard. When a device is sitting outside it has to be able to take a beating. Now of course it is not a good idea to leave your zapper out in the rain, but it does happen. Flowtrons seem to be able to take a moderate shower without going belly up. With a Stinger you probably won’t be as lucky.

The Stinger UVB45 has its good points. It isn’t as obtrusive when it zaps bugs which can be a plus when you have guests. It has a relatively cool feature that turns on and off according to the amount of light outside.

Sadly there are huge reliability shortcomings that negate any of the advantages. You’re playing the zapper lotto when you buy a Stinger. You might get a good one or you might get a unit that breaks down in two months. Why risk it?

I’ll make this simple. There is no reason to buy the UVB45 over a Flowtron.