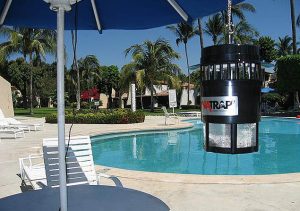 People new to the world of mosquito and bug extermination often mistake the Dynatrap for just another “bug zapper.” As the name implies, it isn’t. The DT1000 is a trapping device. It stops bugs with a totally different mentality. Think of traditional zappers (from Flowtron at least) as Rambo with a big machine gun. This device is a ninja lurking in the shadows. It kills the baddies all the same, but unlike the Flowtron you aren’t constantly reminded that an insect holocaust is underway.

Here’s how the Dynatrap works. Pests find their way in via the mesh at the bottom of the unit. Under the top lid are two lights. This generates the warmth and UV rays that send flying insect its way. Even during the brightest periods of the day, the light somehow succeeds in attracting pests. Down from there, near the middle of the cylinder, a fan blows downward. CO2 (carbon dioxide) gas is released, which is irresistible to mosquitoes. Pressure from the fan makes it nearly impossible for bugs and mosquitoes to escape. The insects die silently.

Let’s take a look at the pros to the trapping approach versus zapping. First off, the Dynatrap DT1000 is much less intrusive.

I’ll be the first to admit that it can be entertaining to watch and listen to bugs meet their fate while nursing a beer on the patio. Even though it’s lower life forms we’re talking about here, it’s politically incorrect hillbilly fun. The problem is some of your more refined guest may not dig the distraction, especially if the zapper is close to where people are socializing.

In addition, zappers give off a smell when a bigger bug or cluster of small fries get barbequed. Personally, I don’t mind it. Picky folks may dislike the phenomenon while eating.

The cost of running a Dynatrap is moderate; a set of replacement bulbs are only $10. Unlike the Flowtron, replacement attractant cartridges aren’t necessary. Somehow the funnel is able to keep producing CO2 gas, which the mosquitoes “get high” on. Forgive me, I’m not a scientist.

Now let’s turn our attention to the cons.

This style of trap simply isn’t as effective as a Flowtron BK-40D or BK-80D zapper. This is what “kills” the Dynatrap DT1000 for me. If your yard is swarming with mosquitoes you may still have to wear bug spray on your body. Given, the situation improves two fold but it still isn’t perfect. With a Flowtron BK-80D next to the patio, I’d be surprised if I got one or two mosquito bites. I’m trying to keep my mind open to new approaches, and not be a zealot for Flowtron. However, I can’t warm up to a product that is more expensive yet not as good, no matter how non-obtrusive.

Although the replacement bulbs are cheap, they don’t last long. Some batches are better than others. This can get really annoying because installing isn’t particularly painless. Big honking zapper lights may be more costly, but it’s generally worth it. I’m a “set it and forget it” type guy.

Cleaning is required every couple of weeks. The marketers at Dynatrap claim that cleaning their product is easier than with a zapper. The truth is both types can be a pain to clean if you let your device get gunked up.

This is one of the better insect exterminator devices out there. It’s a very well-engineered and thought out unit. Its best merit is its unobtrusiveness; at a party people might not even notice it, while they will definitely notice the sights and smell of a zapper.

Condo or apartment dwellers with an outdoor balcony are the only group I’d recommend this to without reservation. The problem with the Dynatrap DT1000 is that it doesn’t work as well as competing zappers. Unless you are married to the idea of a silent device, get a Flowtron BK-80D instead.